Fifth Sunday of Lent | iPray with the Gospel

“The scribes and the Pharisees said to him, ‘Teacher, this woman has been caught in the act of adultery. Now in the law Moses commanded us to stone such. What do you say about her?’ … Jesus bent down and wrote with his finger on the ground. And as they continued to ask him, he stood up and said to them, ‘Let him who is without sin among you be the first to throw a stone at her.’ And once more he bent down and wrote with his finger on the ground. But when they heard it, they went away, one by one, beginning with the eldest, and Jesus was left alone with the woman standing before him. Jesus looked up and said to her, ‘Woman, where are they? Has no one condemned you?’ She said, ‘No one, Lord.’ And Jesus said, ‘Neither do I condemn you; go, and do not sin again.'”

The Pharisees were ready to stone that woman because she had sinned. They knew Jesus. They knew that He wouldn’t like that and decided to put Him in a tight spot. Jesus doesn’t want to stone sinners but to convert them. He has died for them. He loves sinners!

Nevertheless, He didn’t just say: ‘No, don’t kill her’. He wanted the Pharisees to recognize that they were also sinners: His words sounded like: ‘No problem, you can stone her, – let’s start with the one of you who has never sinned.’ He knew them well. Maybe Jesus was writing on the sand their very sins, one after another… They couldn’t condemn her. But Jesus could, remember? He had no sin. Jesus could say, ‘so they couldn’t condemn you… well, I could. But I won’t’ and the reminder: “do not sin again.”

Mother Angelica was walking by the sea when a huge wave crashed at her feet. A small drop of seawater fell on her hand and she returned it to the sea. Then she heard Jesus’ voice inside her say: Angelica, have you seen that drop of water?’ —‘Yes, Lord’, she answered. —‘Those drops are like your sins, your weaknesses, your feebleness and your imperfections. And the ocean is like my Mercy. If you search for that drop, will you be able to find it?’ That is what happens with our sins in confession: they just cease to exist. They can’t be found anymore. Not even by the ‘accuser’, the ‘enemy’. Holy Mary, Mother of Mercy, pray for us sinners… 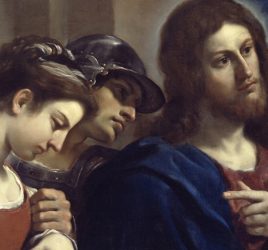 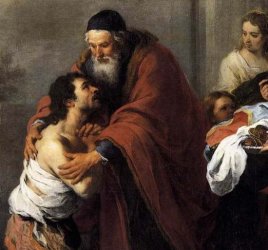 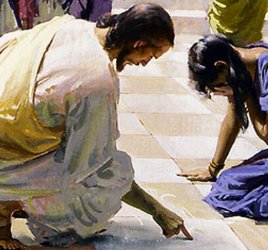