St. Thomas More appears to have been chosen as the fourth saintly Intercessor of Opus Dei in mid-1954. Means and influences (especially publications) by which St. Josemaría might have come to relatively precocious knowledge of, and appreciation for, the English martyr before that date. Several ways in which the saint was an apposite Intercessor. Development of the Founder’s regard for, and recourse to, him during visits to England 1958-62. A relic and a painting. A doubt. Changed circumstances in the early 1960s and the 1964 nomination of St. Catherine of Siena as fifth Intercessor, taking over a portion of St. Thomas More’s intercessory role.

On 20 August 1959 The Times (London) published a feature article, the tenth in a series on ‘People to Watch’, under the heading ‘Spanish Founder of Opus Dei’. An anonymous ‘Special Correspondent’ – in fact the Catholic writer and publisher, Tom Burns – found St. Josemaría ‘a humane and happy character who would have had much in common with Sir Thomas More, whom, indeed, he has chosen as a patron saint’. By that date St. Thomas More (1478-1535) had been for a few years already a saint to whom collective recourse was made in Opus Dei, and the Founder had in both 1958 and 1959 prayed in the Anglican church of St. Dunstan, Canterbury, where the martyr’s severed head had almost certainly been interred four centuries before. 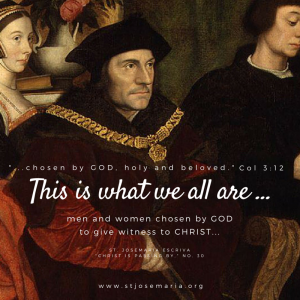 St. Josemaría had, certainly by 1954, determined that the geographical origins of Intercessors still to be nominated should reflect in some degree the universal reach of Opus Dei, then in rapid world-wide expansion. This stage called for frequent dealings with dicasteries of the Holy See and with secular or ‘civil’ authorities at various levels, such that the value of Intercessors for these two fields – St. Pius X and St. Thomas More – must have been manifest.

Stable work by faithful of Opus Dei in Great Britain had commenced on 28 December 1946, and that in English-speaking Ireland and the United States of America followed soon after. This presence in the Anglophone world may have suggested – to put it no more strongly – some appropriateness in nominating an English-speaking Intercessor.

He certainly rejected the poison of nationalism, as opposed to healthy patriotism, and was determined that the universality of Opus Dei shine forth. St. Josemaría was to explain to a young Peter Haverty who met him for the first time in London on 11 August 1958 what he would often point out in other conversations, namely that he might have taken up Spanish saints for intercessory purposes, but that he had determined otherwise. None of the Intercessors was to be Spanish.

St. Thomas More was peculiarly apposite for a role as Intercessor of Opus Dei, both as a decidedly upright professional man and public servant, and as a married man and father. He was to be the only lay and non-celibate saint nominated: the field of the canonised with such characteristics was narrower then even than today. Although St. Josemaría had envisaged married faithful in Opus Dei from the outset, he had been able to obtain approval formally to admit the first three Supernumerary members only in 1948. It is likely that this development influenced in some measure the choice of St. Thomas More as Intercessor only a few years later.

Nomination of Thomas More as Intercessor was no mere gesture to internationalism, for, certainly by early 1957, and afterwards with exceptional frequency up to 1960, as well as again for many months in 1962 and yet again in late 1963, St. Thomas More was chosen as intercessory patron of ‘General Monthly Intentions’ proposed by the Founder to members of Opus Dei for assiduous prayer and apostolic endeavour. At the time of his nomination as an Intercessor there had been entrusted to him the appropriate field, broadly conceived, of Opus Dei’s relations with ‘civil’ or secular authorities and entities. This was but fitting as the saint had engaged actively and by means of his pen in legal and public affairs, as well as political life, at many levels during a career which culminated in his taking office as Lord Chancellor of England. He had worked exceedingly hard, in collaboration with the hierarchy, to make the true teachings of the Catholic Church, then under Lutheran assault, better known.

More specifically, however, almost all the aforesaid Intentions focused on the need to pray and work for better understanding of the complete liberty of individual members of Opus Dei in matters of professional and public life, including politics. They manifestly looked to contemporary confusions and calumnies, originating in Spain but increasingly of worldwide diffusion. In 1957 and after several members of Opus Dei had as private citizens freely accepted governmental posts offered them by the Franco régime. This gave rise to misunderstandings, jealousies and public polemics. 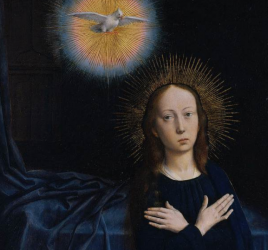 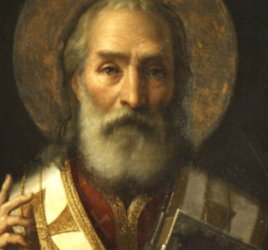