Today, on the feast of Corpus Christi, we come together to consider the depths of our Lord’s love for us, which has led him to stay with us, hidden under the appearances of the blessed Sacrament. It almost seems as if we can physically hear him teaching the multitude: “A sower went out to sow his seed. And as he sowed, some seeds fell along the path, and the birds came and devoured them. Other seeds fell on rocky ground, where they had not much soil, and immediately they sprang up, since they had no depth of soil, but when the sun rose they were scorched; and since they had no root they withered away. Other seeds fell among thorns, and the thorns grew up and choked them. Other seeds fell on good soil and brought forth grain, some a hundredfold, some sixty, some thirty.”

It is a vivid scene. The divine sower is also sowing his seed today. The work of salvation is still going on, and our Lord wants us to share that work. He wants Christians to open to his love all the paths of the earth. He invites us to spread the divine message, by both teaching and example, to the farthest corners of the earth. He asks us, as citizens of both ecclesial and civil society, to be other Christs by fulfilling our duties conscientiously, sanctifying our everyday work and the responsibilities of our particular walk of life.

If we look around, if we take a look at the world, which we love because it is God’s handiwork, we will find that the parable holds true. The word of Jesus Christ is fruitful, it stirs many souls to dedication and fidelity. The life and conduct of those who serve God have changed history. Even many of those who do not know our Lord are motivated, perhaps unconsciously, by ideals which derive from Christianity.

We can also see that some of the seed falls on barren ground or among thorns and thistles; some hearts close themselves to the light of faith. Ideals of peace, reconciliation and brotherhood are widely accepted and proclaimed, but all too often the facts belie them. Some people are futilely bent on smothering God’s voice. To drown it out they use brute force or a method which is more subtle but perhaps more cruel because it drugs the spirit, indifference.

THE BREAD OF ETERNAL LIFE

When thinking about all this, I should like us to take stock of our mission as Christians. Let’s turn our eyes to the holy Eucharist, toward Jesus. He is here with us, he has made us a part of himself: “Now you are the body of Christ and individually members of it.” God has decided to stay in the tabernacle to nourish us, strengthen us, make us divine and give effectiveness to our work and efforts. Jesus is at one and the same time the sower, the seed and the final result of the sowing: the bread of eternal life.

The miracle of the holy Eucharist is being continually renewed and it has all Jesus’ personal traits. Perfect God and perfect man, Lord of heaven and earth, he offers himself to us as nourishment in the most natural and ordinary way. Love has been awaiting us for almost two thousand years. That’s a long time and yet it’s not, for when you are in love time flies.

I remember a lovely poem, one of the songs collected by Alfonso X the Wise. It’s a legend about a simple monk who begged our Lady to let him see heaven, even if only for a moment. Our Lady granted him his wish and the good monk found himself in paradise. When he returned, he could not recognize the monastery — his prayer, which he had thought very short, lasted three centuries. Three centuries are nothing to a person in love. That’s how I explain Christ waiting in the Eucharist. It is God waiting for us, God who loves man, who searches us out, who loves us just as we are — limited, selfish, inconstant, but capable of discovering his infinite affection and of giving ourselves fully to him.

Motivated by his own love and by his desire to teach us to love, Jesus came on earth and has stayed with us in the Eucharist. “Having loved his own who were in the world, he loved them to the end”: that’s how St John begins his account of what happened on the eve of the passover when Jesus “took bread and after he had given thanks, broke it, and said, This is my body which is given up for you. Do this in remembrance of me. In the same way also the cup, after supper, saying: This is the new covenant in my blood. Do this, as often as you drink it, in remembrance of me.”

On the Feast of Corpus Christi is a homily by St. Josemaria Escriva from May 28, 1964. The homily is published by Scepter Publishers in the book Christ is Passing By. 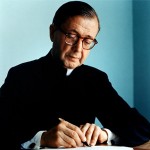 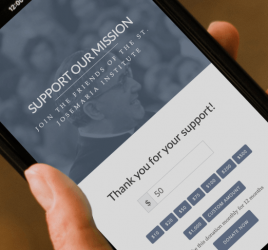