Today once again I prayed full of confidence. This was my petition: “Lord, may neither our past wretchedness which has been forgiven us, nor the possibility of future wretchedness cause us any disquiet. May we abandon ourselves into your merciful hands.”
St. Josemaria Escriva
The Forge, no. 426

The words of the priest at the conclusion of a sacramental confession are very familiar to us: “The Lord has freed you from your sins. Go in peace.” The setting is ordinarily very private and subdued, and within the quiet of the confessional, those words echo deeply in the soul. Absolution conveys Christ’s peace, renewing hope and confidence.

The gospel for the Fifth Sunday of Lent (John 8:1-11) presents an extremely different, highly dramatic setting for Jesus’s own words of forgiveness and dismissal—yet the peace imparted is the same. After a whirlwind of furious accusations and arguments, a woman caught in the act of adultery finds herself alone with Jesus. She’s still alive. Just having escaped certain death by stoning, she can feel her heart still pounding and the rise and fall of her breathing is just beginning to regularize. The Rabbi from Nazareth had intervened with calm authority, deflating the supposed righteousness of the woman’s accusers. He rescued her, as though He had a vested interest in her survival and renewal.

Several times in the Gospels, including the unusual and beautiful one before us today, the Lord forgives sins, but also issues a warning: “Go, and do not sin again,” or again, in St John’s Gospel, “Behold, you are well! Sin no more, that nothing worse befall you.” These are very strict warnings, and maybe we can only appreciate their full force if we imagine the Lord directing them to us, personalizing it with our name: ‘You, __________, go, and sin no more.’

How would that sound, addressed to us individually? Would we say, as if by instinct: Lord, I can’t—I can’t promise that? If so, it would be the truth, and the Lord knows it would be the truth. That is exactly the problem of this rescued woman. With a track record of sin behind her, what could possibly justify the confidence that she (or we) could move forward and avoid this or that sin?

The Lord wants us always to bear in mind two things: the mercy we have received, and where that mercy comes from: the Cross of Jesus. Our Lord’s surprising, merciful response to the woman taken in adultery has everything to do with the “absurdity of the Cross.” The forgiveness is extreme, but only because it is underwritten by the excess of the Lord’s passion. His extreme of love makes all sin pardonable, makes every life capable of renewal, gives everyone the capacity for great holiness.

As we learn more about the heart of a God who empties Himself to become our servant, we discover that, as St Josemaría says,

… God outdoes himself, because he goes much further than he need in order to save us. The only way to measure what he does is to say that it cannot be measured; it comes from a madness of love which leads him to take on our flesh and bear the weight of our sins. (Christ is Passing By, no. 144)

Only the cross of Christ can explain the “madness” of the flood of mercy which He pours out upon this woman, who was quite prepared to be killed. Where is this forgiveness coming from? Who is this rescuing me? Why is He doing it? Jesus, in a few powerful words, changes everything for her. She’s alive again. Standing alone before Christ she is poised at a crossroads between her old life and the promise of a new. She was on the verge of losing everything—and at that moment of crisis, her life surely replayed itself before her eyes. With Saint Paul, she undoubtedly counted everything as loss. But in a moment, having lost everything, she gained the one thing necessary: friendship with Christ Jesus.

We misunderstand the story if we think our Lord is in any way being “permissive” or minimizing the evil of sin. Rather, He uses the adultery of one woman to stand for two extremely important things: the spiritual infidelity of the people He came to save, and the power of the Cross to overcome evil, to heal, to pardon, to save and transform the sinner.

Jesus could not stand there beside this woman and agree with her accusers, “The only solution is to kill her,” as though He had nothing better to offer, no other solution. At the time of Moses, stoning was the answer to adultery—a punishment established not only for the sake of the common good of God’s people, but also to show the magnitude of the offense. Once the Messiah comes, however, sin has a remedy, and it comes from the Messiah nailed to the cross for her sin and for your sin and for mine. We are all wrapped up in the fate of this woman.

This is not a nice woman and we need not “sugarcoat” her. Either she was married and unfaithful to her husband or unmarried and abetting the infidelity of another. It’s important that we not romanticize the sinners whom Jesus pardons, as though their sins are a kind of pleasing “artistic” contrast to His mercy. This woman’s sins were as real and ugly as our own. The harm she has done is as real as any harm we ourselves have caused through sinful excess or neglect. Failure to recognize this fact renders the mercy of Jesus not merely less poignant but less gratuitous.

But just as for her as for us, Jesus spares and forgives a sinner because the avenue for forgiveness had been cleared away. She was humbled to the dust, made ready to be lifted up by Him who stooped down and heard her cry. For her, the terror of a violent death formed the initial opening to Christ, so that the balm of His mercy could enter in both to convict and to heal, but not to destroy.

It is in the repetition of the Lord’s forgiveness for human sin that the beauty of the cross is revealed anew, each and every time absolution is granted and peace restored to fallen people.

How beautiful are those crosses on the summits of high mountains, and crowning great monuments, and on the pinnacles of cathedrals…! But the Cross must also be inserted in the very heart of the world. Jesus wants to be raised on high, there…. (The Way of the Cross, no. 11, 3)

The glory that Jesus seeks from us is to be raised on high within us, that His cross may conquer not only our sinfulness, but also do the equally important work of restoring courage and confidence. It is one thing to be forgiven, another to rise from the ashes of defeat and stride boldly on a new path to a new life. It is the cross that lifts our head and heart to embark on that road with the serene assurance that Christ “has now reconciled in his body of flesh by his death” we “who once were estranged and hostile in mind, doing evil deeds,” making peace with us through the blood of His cross (cf. Colossians 1:19-22). 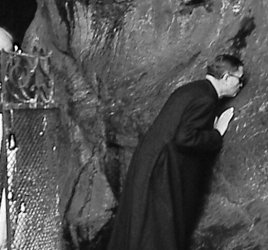 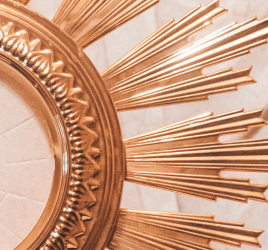