No matter what situation we may find ourselves in, neither you nor I can ever allow ourselves to behave in a way that is selfish, materialistic, comfort-loving, dissipated or — forgive me if I speak too candidly — just plain stupid!

The Lord warns us against angrily calling another “You fool!” (Mt 5:12). But the fact that He calls certain individuals foolish shows that some merit the epithet (cf. Mt 7:26, 23:17, et al.).1 In fact, saints generally have no trouble calling others fools along with themselves, as when St Josemaria said shortly before he died:

They will ask you what the Father was like. I can tell you the answer: “The Father? A sinner who loves Jesus Christ, and who has never quite managed to learn the lessons God has taught him. A great fool. That’s what the Father was.”

Nor does St Paul spare the Galatians as he famously rails against their backsliding:

O foolish Galatians! Who has bewitched you, before whose eyes Jesus Christ was publicly portrayed as crucified? Let me ask you only this: Did you receive the Spirit by works of the law, or by hearing with faith? Are you so foolish? (Gal 3:1-3)

What makes a fool a fool, or the stupid stupid, is knowing better but not doing better. Now, knowledge does not equal virtue. We can do wrong fully aware that we are doing wrong. But our faith is not just any kind of knowledge or information. It is revelation. It is God sending a compelling message of love in the person of His Son, whose sacrifice for us upon the cross compels change without forcing it.

And that forms the context for St Josemaria’s strong language.

Jesus gave himself up for us in a holocaust of love. What about you, who are a disciple of Christ? You, a favoured son of God; you, who have been ransomed at the price of the Cross; you too should be ready to deny yourself. (Friends, no. 129)

In light of that supreme sacrifice on the cross, how can we afford to be anything other than likeminded, denying ourselves out of love for Him and others? To live in contradiction to the fact of the cross shows an insensibility to its message: New life has been purchased for us at the highest possible price. Consequences follow.

Our Lord Himself expects us to count the cost of our commitment, so that we might be prepared to spend ourselves not only pro tem, but unto the end:

For which of you, desiring to build a tower, does not first sit down and count the cost, whether he has enough to complete it? Otherwise, when he has laid a foundation, and is not able to finish, all who see it begin to mock him, saying, ‘This man began to build, and was not able to finish.’ Or what king, going to encounter another king in war, will not sit down first and take counsel whether he is able with ten thousand to meet him who comes against him with twenty thousand? And if not, while the other is yet a great way off, he sends an embassy and asks terms of peace. So therefore, whoever of you does not renounce all that he has cannot be my disciple. (Lk 14:28-33)

We all get the idea of self-denial for the sake of natural rewards: from raising children to fitness, human nature demands a measure of self-sacrifice for the sake of a greater future return. And so when we hear the Lord’s concrete examples we say “Of course. Who would be so foolish as to build without funds or to fight a losing battle?” But He is not making a point about being outmatched in human affairs. He is explaining what the cost of following Him entails, and it is the renunciation of everything. The irony is clear: Kings need manpower, and lots of it, to do battle. Builders need funds, and lots of them, to complete their projects. But Christians need to have a lot of nothing that they may follow Jesus as Jesus needs to be followed: unsupported by human props or expedients.

Having nothing, ‘renouncing all that you have,’ must always be understood more in terms of attachment and detachment. One can live in a palace and have the soul of a beggar, that is, be poor in spirit even when one wants for nothing. Likewise, a materially poor person can be greedy and envious, and so vitiate his poverty, which could be embraced for the love of God. Following Jesus does not mean not having stuff. It means not wanting the stuff you have more than you want Jesus.

Reenter the Cross. The cross has become an ornament, jewelry, art, but first it is the humiliating instrument of execution. Now, no one is attracted to a death message, unless it is ultimately a life message. And so to leave the corpse on the cross and walk away despairing shows we don’t know what to expect or what to do once the crucified One breathes His last. It must mean life if it means anything at all.

St John of the Cross forcefully explains how life replaces death in the Christian life, and this is especially true of all the “little” intermittent deaths that should spontaneously occur during the course of each day. “We are not walking with Our Lord” says St Josemaria, “unless we are spontaneously depriving ourselves of many things that our whims, vanity, pleasure or self-interest clamor for” (Friends, no. 129). Death occurs every time we say no not only to our sinful tendencies, but also when we curb the unruly movements of our appetites, memory, desires, and so forth.

St John of the Cross details what St Josemaria says in brief:

[T]he perfect spiritual life, the possession of God through union of love…. is acquired through complete mortification of all the vices and appetites and of one’s own nature. Until this is achieved one cannot reach the perfection of the spiritual life of union with God, as the Apostle also declares in these words: “If you live according to the flesh you shall die; yet if with the spirit you mortify the deeds of the flesh you shall live” (Rom. 8:13).

Let it be known that what the soul calls death is all that goes to make up the old self: the entire engagement of the faculties (memory, intellect, and will) in the things of the world, and the indulgence of the appetites in the pleasures of creatures. All this is the activity of the old life, which is the death of the new spiritual life. The soul is unable to live perfectly in this new life if the old self does not die completely. … In this new life that the soul lives when it has arrived at the perfect union with God here being discussed, all the inclinations and activity of the appetites and faculties – of their own the operation of death and the privation of the spiritual life – become divine.2

Is it clear why “stupid” and “foolish” might sometimes describe us as disciples? Easter has come but has not gone. Our new life is held out to us for the living. But we often balk, not at the idea of mortification, but at the practice of it—failing to see it in the concrete as the only way to full life. Our folly lies in avoiding new life because we won’t put to death the old one. And this is what earns us St Josemaria’s stinging rebuke. This is also why he goes on to insist that we must reject the exaggerated difficulties of death to self that always loom menacingly in the imagination. Our aversion stunts our Christian lives of their natural growth and fruit.

Not a single day should pass that has not been seasoned with the salt and grace of mortification; and, please get rid of the idea that you would then be miserable. What a sad little happiness you will have if you don’t learn to overcome yourself, if you let your passions and fancies dominate and crush you, instead of courageously taking up your cross! (Friends, no. 129).

Like many truths in the spiritual life, this one must be lived to be understood. And the fear of being miserable is one that overshadows our best intentions in cross carrying, leaving our following hesitant and cautious. And yet, what happiness is there in leaving sacrifices undone, in going halfway in love when we could spend ourselves completely? Once we taste the fruits of new life in Christ, the old life by comparison begins to yield a flavor insipid if not altogether bitter.

Yet to those who persevere and “conquer,” the Lord promises a taste of the “hidden manna,” whose delights only the wise may enjoy (cf. Rev 2:17). He who eats this bread will live forever.

1 It is worth noting that some ancient manuscripts of Matthew’s Gospel add “without cause” after the Lord’s words “everyone who is angry with his brother…” (Mt 5:22). Thus Saint Augustine comments on this passage from the Sermon on the Mount: “Indeed, in the three statements before us, we must observe that some words are understood. For the first statement has all the words that are necessary. Whosoever, says He, is angry with his brother without a cause, shall be in danger of the judgment. But in the second, when He says, and whosoever shall say to his brother, Raca, there is understood the expression without cause, and thus there is subjoined, shall be in danger of the council. In the third, now, where He says, but whosoever shall say, You fool, two things are understood, both to his brother and without cause. And in this way we defend the apostle when he calls the Galatians fools, to whom he also gives the name of brethren; for he does not do it without cause.” 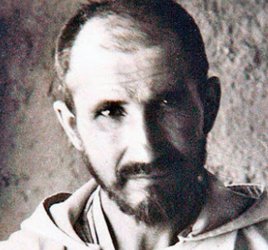 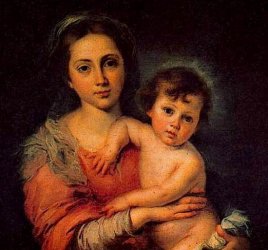 To Jesus through Mary | A Homily by St. Josemaria Escriva 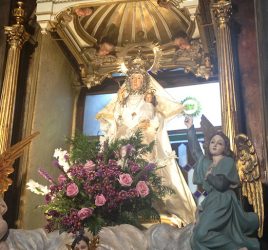 Marian Pilgrimages in the Month of May