“Something Beautiful” | Monday of Holy Week

“But Jesus said, ‘Let her alone; why do you trouble her? She has done a beautiful thing to me’” (Mk 14:6). This verse, although not recorded by St. John in his account of the anointing at Bethany is recorded by both Matthew and Mark, indicating how deeply Mary’s gesture touched our Lord’s heart, His priestly heart. In the outpouring of her love in the form of this perfumed oil our Lord saw reflected His own self-emptying—both in the incarnation and His imminent passion:

He emptied himself, taking the form of a servant, being born in the likeness of men. And being found in human form he humbled himself and became obedient unto death, even death on a cross. (Phil 2:7-8)

This is what Mary Magdalene did in anointing Jesus at Bethany: she stooped to the ground in slave fashion and washed and perfumed the feet of her Master, her Priest—anticipating an action Jesus will take within days in the upper room. In a sense, she herself demonstrated a priestly love for Him: by performing an act of self-emptying, self-donation, which is the type of love the incarnation and passion teach us. It is the priestly love so often encouraged by St Josemaría for all Christians:

Live and work for God, with a spirit of love and service, with a priestly soul, even though you may not be a priest. Then all your actions will take on a genuine supernatural meaning which will keep your whole life united to the source of all graces. (The Forge, no. 369)

If people tend to measure value by cost, amount, rarity, high demand, etc., love, especially priestly love, is calculated by one measure only: sacrifice. This is almost the same as saying that no calculation is involved at all, since all is poured out. Bystanders to a priestly sacrifice are made to look on as some of the most precious things are irretrievably consumed, used-up, poured out. Costly perfume, incense, precious metals, time, and ultimately, lifeblood—all fit into the same category of sacrificial love.

What a shining proof of magnanimity is this extravagance on Mary’s part! Judas on the other hand laments this waste of so valuable a perfume; in his greed he had been calculating the price: it would have fetched at least ‘three hundred silver pieces’. (Friends of God, no. 126)

It would be interesting to hear what each of us bystanders sees in this scene. Jesus sees pure beauty in it. He sees a love whose story will be told and retold until the end of time: “Truly, I say to you, wherever this gospel is preached in the whole world, what she has done will be told in memory of her” (Mt 26:13). We know what Judas thinks about it. He interpreted this extravagant outpouring as a complete waste. It seems that he even got some of the other disciples to chime in as well: “But when the disciples saw it, they were indignant, saying, “Why this waste?” (Mt 26:8).

Mary sees in Jesus her priest, her Savior, the One who had rescued her from total ruin. And her outpouring mirrors what she perceives herself to have received from the Lord: everything. To see Jesus as worthy of this kind of tender outpouring is to appreciate what He has and continues to give us: saving love, love that rescues us when we are weak and broken, even when we are unlovable to ourselves.

Seeing this, we love Him in a comparably priestly way, even if it seems we have so little to offer. So much mercy has been shown us that, in our embarrassment, we may find ourselves scraping together whatever we can, turning everything upside down, to give the best we have in return. On our part, this can never be reimbursement. It is pure gift rendered for pure gift. And this is what our Lord calls “a beautiful thing.”

In some way, anyone who has ever received the mercy of God with a deep sense of unworthiness has felt just like this woman. An irresistible (and sometimes even clumsy) desire to somehow repay God’s goodness urges us on, bypassing any obstacle, heedless even of propriety and restraint. And so in the social setting of this dinner at Bethany, the Lord approves of everything Mary does. He even seems to be encouraging this embarrassing, excessive behavior. Amazing. The dramatic spectacle of this woman carrying out all of these things to the full, in the middle of the meal, in the wrong place and at the wrong time, this is what pleases Jesus.

That the Lord prophesies that wherever the Gospel is preached her story will be told as a part of that Gospel couldn’t give us a stronger indication of her importance. It is not simply a charming vignette; it is an integral part of the Gospel itself. For it illustrates clearer than almost anything else what our relationship with Jesus is supposed to look like: Gentle priest to grateful, redeemed sinner.

It also helps us understand why the Lord does not publicly expose the hypocrisy of Judas. Jesus knows that he’s stealing, and using Mary’s extravagant display to put himself forward as an advocate for the poor. But to unmask Judas at this point would be a counter-message to a verse that St Josemaría says explains the Lord’s entire life: “Have I any pleasure in the death of the wicked, says the Lord God, and not rather that he should turn from his way and live?” (Christ is Passing By, no. 162).

John, who tells us that Judas was a thief and wasn’t concerned about the poor, could have approached Jesus and said, “Master, Judas is stealing our common money. What are you going to do about it? If you don’t do anything, you will be tolerating injustice.” And Jesus could say: “John, I’ve been tolerating sin and injustice since the beginning of the world. On purpose. I saw Satan fall like lightening from the sky. I know what Judas is doing. I know his hypocrisy. But: I do not wish the death of the sinner, but that he turn from his evil way and live.”

If St John did not question our Lord in this way, it is probably because he was among the few who understood the meaning of Mary’s gesture. After all, of all those at this dinner, only he and Mary follow their priest to His final altar, the cross, and assist Him there. And that is the sign of comprehension, of appreciation of the mercy of God. Those whose gratitude runs deep are drawn to the cross as the source of forgiveness, restoration, and of unfailing love.

Continue to Reflection for Tuesday of Holy Week… 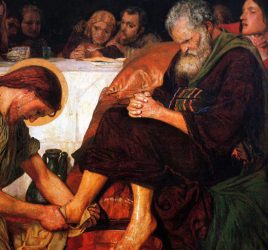 Finding Joy in Our Poverty 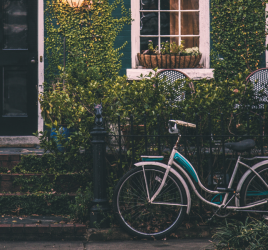 Discovering Something Divine in the Ordinary