Seeds in the Savior’s Hands

“Christ plants the seeds one by one so that each Christian in his own setting can bear witness to the fruitfulness of the death and resurrection of the Lord.”

St. Josemaria Escriva
Christ is Passing By, no. 157

Saint Josemaria liked to apply our Savior’s image of Himself as a dying and rising seed directly to individual Christians. Shortly before His passion, Jesus had likened Himself to a grain of wheat that must fall into the earth and die before it can live more abundantly by bearing fruit (cf. Jn 12:24). In graphic language combining this sacrifice and fruitfulness, St Josemaria writes of Christians as these new seeds:

Christ presses the grain in his wounded hands, soaks it in his blood, cleans it, purifies it, and throws it into the furrows, into the world…. If we are in Christ’s hands, we should absorb his saving blood and let ourselves be cast on the wind. We should accept our life as God wants it. And we should be convinced that the seed must be buried and die if it is to be fruitful

Here we are faced with a set of near paradoxes. Throwing something to the wind might be recklessness, but it can also be a gesture calculated to increase the radius of the harvest. Accepting our life as it is may be cowardice or resignation, but it can also be the heroic stability of soil that supports the silent growth of roots. Burial followed by death can mean yielding to defeat, or it can be the sacrifice that fertilizes new growth. The fact that life often springs out of dead or corrupted things is nothing new in nature; it is a natural paradox. But that the same should be true in the realm of the spirit is nothing short of a revelation.

It is this startling revelation with which the disciples are confronted throughout Easter day. Jesus, making good on His promise uttered during the Last Supper, “I will not leave you orphans, but I will come to you,” visits and comforts His disciples (Jn 14:18). Yet His manner of comforting is initially uncomfortable: At first approach, the risen Lord seems to them a stranger, a gardener, or even a ghost.

This could be a strategy designed to heighten the impact of His self-revelation, like undoing a blindfold before revealing an extraordinary birthday gift to a friend. But it is more. Delayed recognition of the Savior after His resurrection serves to draw out of the disciples whatever sorrow, doubts, or even despair that is mastering them. So that when the disciples’ eyes are opened to recognize the Lord, they are ready to receive the Lordship of Christ in a saving, healing, and lasting way. In order to experience the new life that Jesus brings, they have to feel what it is to be dead.

They, like all whom Jesus came to save, must know that they suffer from spiritual and moral sicknesses that only His death and resurrection can remedy. Hence, to feel the inertia of death is to feel one’s hopes dashed, to see no way out of a predicament, and then to be delivered by the only One who can say, “I am the resurrection and the life; he who believes in me, though he die, yet shall he live, and whoever lives and believes in me shall never die” (Jn 11:25-26).

The very astonishment produced by His appearances proves to be like the first gasp of fresh air of a newborn life, or of a restored life. The holy fear is the impetus for the imitation that Jesus will surely ask of His Apostles and other followers. We are told as much by the haste that marks the movements of the disciples from Easter dawn until evening: Mary Magdalene, Peter and John, Cleophas and his companion—all in a hurry to spend themselves, to share or verify the news of the resurrection. Some, who had literally run to save their own lives days before, are now running to bear witness to this new Life.

The surprise surrounding the events of Easter day followed by personal contact with the Savior, inspires a confidence in these earliest witnesses that will last a lifetime. Until the end of his life, St John the Apostle will still contemplate what he had seen and touched in Christ: “the life was made manifest, and we saw it, and testify to it, and proclaim to you” (cf. 1 Jn 1:1-4).

All of this presents us with an obvious difficulty. It is the problem of believing in what our hands have not necessarily touched, nor our eyes seen. It is the problem of overcoming our own periodic inertia and despondency as we follow Him whom we love but cannot see (cf. 1 Ptr 1:8). Although the same experiences enjoyed by the Apostles at the time of the Lord’s historical rising may not be ours, faith demands that we live as though they were.

We who live centuries after the historical fact of the resurrection are still called to be apostolic seeds, cast to the winds by the divine Sower. That we might be those dying but fruitful seeds, we must own by faith and love those personal encounters enjoyed by Mary Magdalene, Peter, John, and the rest.

What this means is doing exactly what St Josemaria advises: undergoing the purification and surrender of discipleship, and then seeing and touching the outcome for ourselves. Putting ourselves in the Savior’s hands by faith, following the direction He gives to our lives, is the only way in which we can “bear witness to the fruitfulness of the death and resurrection of the Lord,” i.e., by going through it ourselves, each in his own way: “What you sow does not come to life unless it dies” (1 Cor 15:36).

Whatever disadvantage we might be at because we live many generations after the events of Easter, having a personal stake in the reality of Christ’s resurrection makes up for it. To have “a stake” in the risen Christ means living with the resurrection as the radical hope that underwrites every risk we take in the name of the Gospel, every hope we entertain for salvation.

If we invest something seen for the unseen, the tangible for the intangible, not only do we show how deep our faith runs but we also make it alive and fruitful. Those who give up, for example, their youth, their time and energy, the possibility of marriage and children, or the freedom to accumulate wealth—all for the sake of the Gospel, are the ones whose fruitfulness is assured by the Savior Himself (cf. Mk 10:29-30).

Blessed John Henry Newman writes of this self-surrender, gently connecting our sacrifice to Christ’s, and His to the seed of divine life within us:

Blessed are they who give the flower of their days, and their strength of soul and body to Him; blessed are they who in their youth turn to Him who gave His life for them, and would fain give it to them and implant it in them, that they may live forever (Parochial and Plain Sermons, vol. VIII, no. 16).

We can do what Jesus has done if we put ourselves into His hands, allow Him to purify us, and consent to be cast into the furrows of the world. The seed that must lose its recognizable shape to become a new thing, that must be covered over by the earth and patiently demise in the soil until it grows and bears fruit, is the divine paradox of human fruitfulness in Christ.

The content is published by the St Josemaria Institute for the free use of readers and may not be copied or reproduced without permission from its author © Fr. John Henry Hanson, 2015. 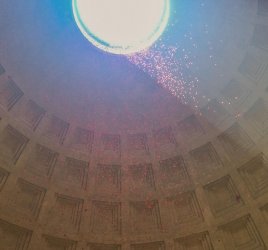