Novena for Work: An Interview

On October 10, 2009, Fr. Francisco Faus, author of the Novena for Work through the intercession of St. Josemaria Escriva, was interviewed by the St. Josemaria Information Center in Rome.  The “Novena for Work” has become a prayerful tool that hundreds around the world have employed in their search for work and in fulfilling their work.

Interviewer:  What led you to publish the Novena for Work to St Josemaria Escriva?

Fr. Faus:   What moved me to write the Novena for Work and the other two novenas to St Josemaria (the Novena for the Sick and the Novena for Families) was my love for the founder of Opus Dei. I lived near him for two years in Rome (from October 1953 to July 1955) and then in Brazil during May-June 1974. This filial love for someone I always saw as a father – the Father –, and the devotion which, like thousands of others, I feel for him, impelled me to prepare these novenas and circulate them. I thought they might be a popular, simple, accessible way of introducing many people to St Josemaria’s teachings and to his intercession and help.

Interviewer:  Were you surprised by the popularity of the Novena for Work?

Fr Faus:  Yes. Especially when I received requests to translate it into different languages – English, French, Spanish, etc. – and saw that thousands of people searched for it on the web. I think this shows clearly that you only have to know St. Josemaria to love him, trust him, and obtain many graces from God. May God grant that through his intercession, these little novenas will help many more people.

Interviewer:  Do you often hear about favors received through this or one of the other novenas you wrote?

Fr Faus:  Yes, mainly through the Novena for Work. I have heard of quite incredible cases. For example, during a retreat I preached recently for professional people, a young architect told me that he had been unemployed, recently married and with a small baby. One day his doctor gave him the Novena for Work (he’d never heard of St Josemaria before) and on the third day of the novena, he unexpectedly got a call about an excellent job, which has continued to grow up to the present. He was happy and grateful to St Josemaria, and for the way his doctor had done apostolate with him, or rather for the help of St Josemaria, who helped him to make up his mind to lead a serious, intense Christian life.

I must admit that, although there aren’t so many of them, what makes me really happy is stories of the couples in crisis, families with problems, etc., who after doing the Novena for the Family rediscover peace and harmony through St Josemaria’s intercession.

I am also very moved when I hear about the help of St Josemaria’s intercession, through the Novena for the Sick for people who are seriously ill. In many cases he has helped them to bear suffering and sometimes imminent death with great faith and love of God, with the peace of children of God.

Interviewer: Did you know St Josemaria yourself? Did you think that you were face-to-face with a saint?

Fr Faus:  Yes, as I said, I knew St Josemaria in Rome. Then I had some brief meetings with him at the end of the 1950s and in 1960, in Spain. Again, during some days I spent in Rome in December 1973, and for the last time during his stay in Sao Paulo from May 22 to June 7, 1974. I wrote about those encounters, especially the ones in Brazil, in the booklet São Josemaria Escrivá no Brasil, esboços do perfil de um santo (“St Josemaria Escriva in Brazil: sketches for the profile of a saint”), Ed. Quadrante, São Paulo 2007. The booklet is available, together with other spiritual books, on my website. In chapter 2, under the heading Fiquei com medo (“I was afraid”), I tried to describe the conviction, the striking certainty that I always had, of being in the presence of a saint.

Interviewer:  We are now in the Year for Priests (2009). What does St Josemaria have to say to priests today?

Fr Faus:  St. Josemaria said and wrote many things for priests, and they take on greater relevance with every day that passes. He had great faith and a very clear vision, received from God, of what is essential and perennial in the vocation and mission of priests. As the crisis, doubts and confusions about priests that became so widespread in the past decades begin to blow over, this clear-sightedness of his shines out more and more, and it is helping very many priests. I can say this with the “wisdom of a lived experience”, because one of my main pastoral tasks is to provide spiritual attention for diocesan priests.

The founder of Opus Dei never got tired of repeating that priests are “men of Love”, chosen by God with preferential love, and called to holiness – as are all Christians – in carrying out their ministry, their priestly work.

Priests should be characterized by an immense love for the Eucharist, a real craziness of love for God (Holy Mass, Eucharistic adoration, prayer before the Tabernacle, etc.); close, personal friendship with Jesus Christ (being a soul of prayer); a great thirst to enter more deeply and “wisely” (with mind, heart and life) into the Word of God; a child’s love and affection for our Blessed Lady, the Virgin Mary; great love for the Church, as the fruit of faith, which is shown in sincere faithfulness to the teachings of the Magisterium and obedience to their Bishops; self-denial and a spirit of service to all souls without exception, as a reflection of Christ’s self-giving for us; and much more.

All that is a very poor summary of what St Josemaria said. But, thank God, we have publications like his homily “A Priest Forever” in the book In Love with the Church, which presents St. Josemaria’s message much better than I can express it here.

Fr. Francisco Faus was born in Barcelona, Spain in 1931.  He is a priest of the Prelature of Opus Dei. He graduated in law at the University of Barcelona and did a doctorate in canon law at the University of St Thomas Aquinas, Rome. He was ordained in 1955 and has lived in Sao Paulo, Brazil since 1961, doing pastoral work with university students, workers, priests and seminarians. He has written several spiritual books including the Novena for the Family, Novena for the Sick, and A Man Who Knew How to Forgive: Incidents from the Life of St. Josemaria Escriva. 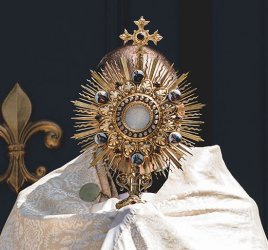 "The Ultimate Relationship": An Interview with Joe Hernandez 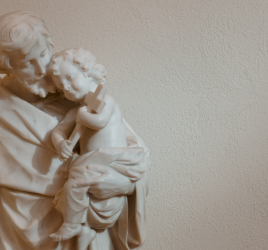 A Spiritual Toolkit for Devotion to St. Joseph

"Honoring Our Lady": An Interview with Katie Luangkhot